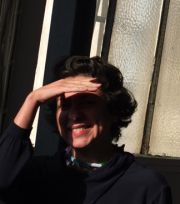 Born in Algiers, Narimane Mari began her career in Paris, in two consulting agencies in communication (one of which she co-founded) and on the creation of culture extra for newspapers and TV stations. She has contributed to the development of art galleriesand has initiated a collection of photographic books. In 2001, she produced her first film, ‘L’Arpenteur’, which won the Jean Vigo Award. In 2006, in Paris she founded (with a partner)  Centrale electrique, in order to produce engaged documentaries and fiction films.

In 2010, she also founded Allers Retours Films in Algiers, at the same editorial line. Her filmography as a director includes Prologue (2007), a medium-length film about the artist Michel Haas, and Loubia Hamra (Bloody Beans 2013), her first feature film which receive five major international awards.
In February 2015, she directed a film project for Hors Pistes at the Centre Pompidou Everyday life, which offers a sort of urban choreography on public spaces and collective privacy in large urbancities. The making of the film will continue over several months. She is preparing her second feature, The Madmen’s Fort, an enchanted opera happening in the desert in 1860. 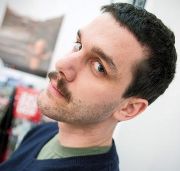 Igor Bezinović was born in Rijeka in 1983. He obtained his degree in Philosophy, Sociology and Comparative Literature from the Zagreb Faculty of Philosophy and Film and TV Directing from the Zagreb Academy of Dramatic Arts.

He is both a professional and an amateur filmmaker. He directed around ten shorts and a feature length documentary The Blockade.

He publishes fragments on everyday life and metaphysics on Tumblr blog Lavandin.

It had its world premiere at Hot Docs, Toronto and European premiere at Karlovy Vary IFF where it was awarded the Federation of Film Critics of Europe and the Mediterranean Award and was screened at more than 20 festivals including MOMA’s Documentary fortnight’s Gala closing night. Winter/Miracle (2012) a docufiction film coproduction co-directed by Gustavo Beck from Brazil was screened at CPH:DOX and Goteborg IFF and won award for the best Central and Eastern European Film at Jihlava IDFF 2013.

Aleš Suk is an independent director, producer and artist of new media. He graduated in 2002 from FAMU in Prague in animation and multimedia, and gained his master’s degree in 2005. Since 2004 he is a visiting professor at FAMU, Department of film editing. From 2009 to 2013 he worked as an associate professor at the Academy of Applied Arts, University of Rijeka, on the course “Experimental Film and Animation” and the course “Interactive Design”.

Since 2012 one of the tutors and the organizers of the Platform for the support and development of hybrid AV creativity REFINERI.