What we fear is what we secretly desire.

TIE is a variation on variations of familiar stories. An echo containing echoes of the others.
Once upon a time, there were:
Three billy goats,
three blossoms,
three princesses.
A wonderful Buntić family. Two brilliant sisters, with which something s not right.
A flock of inflatable toys.
A group of ex-boyfriends.
A revolution.
A secret.
True love
Justice. 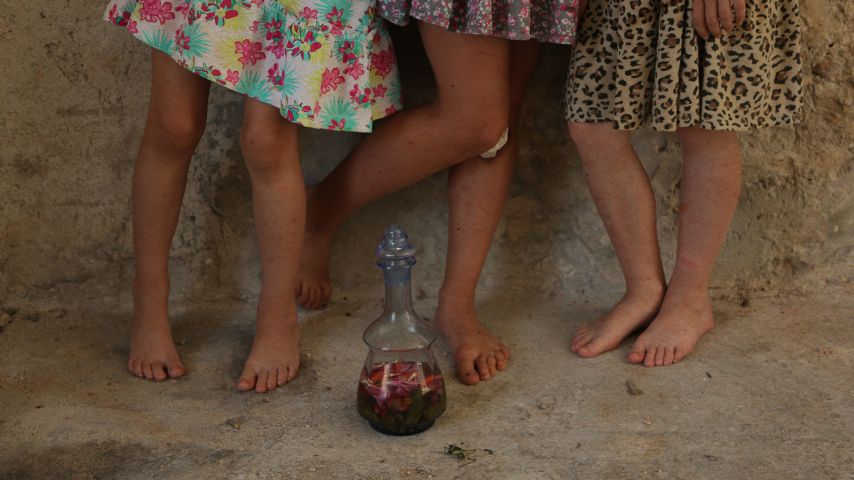 THE TRUTH IS WHAT MY MOM SAYS.

“If you really want your wish to come true you need to 1 catch ten grasshoppers, fit them into one match box and carry it with you, 2 eat a plateful of plaster from an old church, 3 and finally drink at least three sips of magic potion made according to the secret recipe that only deaf person can learn from a mute one”

LYING CARPET is a docufiction. It is set in a universe of children’s games, playing with subjects of lie and belief. It is set in a place where lies are becoming the truth.

DID I COME TO CHANGE THE WORLD, OR JUST TO LEAVE?

“- Does everything that lives dies?
– No, only the bad ones die.”

BLESSED ARE THOSE WHO HAVE NOT SEEN AND YET BELIEVED.

A docu-fiction fairy tale about dreams of our neighbors.

FATHER,
I DON´T UNDERSTAND YOUR INTENTIONS BUT I KNOW MY WAY.

There was once a Jesus and a Mary.
It is not certain if this was in heaven or somewhere below.
They fell in love.
They didn’t get married.
This Mary found Jesus so fucking boring that she left him.
She sinned, stole and kissed other men and women.
When Jesus finally tracked her down, she told him to go fuck himself.
He got angry and since then, everything went wrong, but maybe not…

Allegorical docufiction dealing with transformations of the sacral spaces and religious messages. Anonymous protagonists from opposite sides of the world cross the paths of their faith in meditative impressionistic film.

WHAT WILL YOU BE REMEMBERED FOR WHEN YOU RE DEAD?

A typical cross-section of bigoted neighbors in an ordinary apartment building are invited to an intimate party to honor the memory of the late Marija Violić, a fellow tenant, friend and grandmother. Instead of descending into sentimental cliché, the party soon evolves into a reality show, complete with all-singing, all-dancing interludes. The venue for this unique gathering is Marija’s apartment and the music is provided by the hired musicians – a bunch of complete unknowns as far as the guests are concerned but in real life, the hugely popular Czech dance electro-trash band Midi lidi.

And the purpose of this unique get-together? To finally fulfill a long overdue family obligation to the late, great, dearly departed Marija…

WHAT THE GOOD OR EVIL IS, NO ONE CAN KNOW. ONLY THE ONE THAT CREATES, MAYBE.

I shall rape you, you white, innocent paper;
huge is my passion and you’ll hardly be able to take it;
you’re dodging my rage and you’re white with terror;
a kiss on your paleness — my kisses are black.
There is no law above you and all the laws are dead for me;
I flee from them and my flight is swift;
I passed the place where bent necks do crawl,
where dogs rejoice in orgies and where licking is their harlotry.
You’re eluding me, you timid hind, trembling like the first shame;
Tempting is the innocence and insanity is its echo;
I’m frantic, oh, my paper, and rage flickers in my eye.
Pious is this nation, with tails between their legs;
there’s no sincerity in their eyes and wandering is their walk;
sniffing’s their job, richly paid for it;
there’s no place for me among them and my word’s offensive;
I’m swallowing my thougts and I’ll be drowned by my shame.
Halt, my love, and listen to my pain;
you admit the human word and an ass does not yet understand the man;
oxen drag the plow and the enslavement brings them hay;
a little horse carrying a boyar, its hair is shiny;
a hog is feeding richly, its meat nice and tasty:
the laws are slender and harsh and the stables are filled with oats.
Do not elude me, you kissed girl, there’s no woman for me;
they don’t give themselves for nervous pecks and tense complexion;
oh, I have no gold, and can have no diplomas without it.
I love you, my paper, and warm is my love;
warm as my blood and frantic as my fury.
Give yourself forever — black are my kisses;
black are my kisses, with rosy blood within them.